Are you planning to buy a plasma set but don't know which one to get? Indeed, there are many parameters to take into account. This article aims to enlighten you in your choice by presenting you the characteristics of these devices. After reading it, you will know how to choose a plasma cutting station!👌 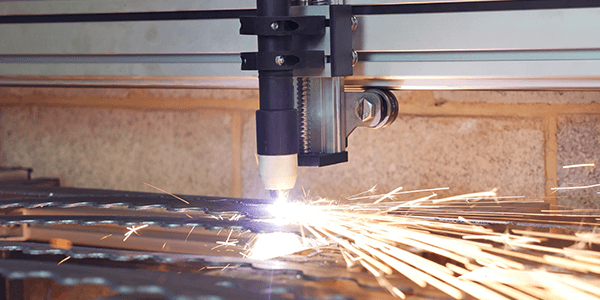 To operate, a plasma cutter needs pressurized air, but not just any air! 😮💨 It needs quality air that does not contain water. It is therefore important to install a dehumidifier before the air intake of the station. Often these modules are supplied with plasma stations.

The compressor must be powerful enough. Plasma cutters consume a lot of air. If your compressor does not provide enough air flow, the cuts will not be clean. The characteristics of the required compressor can be found in the data sheets of the plasma cutters.

2. A single-phase or three-phase station

There are stations that can be supplied in single phase (220 V, traditional plug) or in three phase (3 x 400 V). ⚡ Three-phase substations will be more energy efficient and powerful. They are therefore to be preferred if you have a three-phase connection.

The pilot arc allows to start the cutting process without any contact between the torch and the sheet metal to be cut. This option is very interesting and facilitates the use of a plasma cutter.

The haute fThe frequency is not related to the pilot arc. In fact, there are non-HF sets that have the pilot arc. The HF or non-HF is the means of igniting the arc. Just remember that HF sets are more reliable than non-HF sets. This is because there are moving parts in the torches of non-HF sets, unlike HF sets where nothing moves. The problem with HF sets is that high frequency has a bad reputation for producing disturbances. These disturbances can disturb the electronics around the arc.

You will have understood, these HF sets will not facilitate the creation of a cnc plasma cutter, which contains a lot of electronics. They are not to be excluded from your choices, I personally created a cnc plasma cutter with a HF set.

5. An outlet for THC

If you plan to use your plasma station on a cnc plasma cutter, then I strongly advise you to choose one that has a THC (Torch Heigh Control) output. This socket will allow you to connect the plasma station to a THC module.🔗So there will be no need to open the plasma station and risk losing the warranty. If you don't know what THC is, I refer you to the article about this module.

The amperage of the machine is proportional to the thickness of the material it can cut. In the sales pages of plasma workstations, we often see: "max thickness 25 mm". This value should be taken with care. Indeed, the station will be able to cut this thickness, but the cut will not be clean. We call this kind of cut, separation cuts. So don't rely on this information, and choose your machine by looking at the maximum clean cut thickness.

The duty cycle is the percentage of time the station is running at full power over a 10 minute period. A substation with a duty cycle of 60 % will therefore be able to cut for 6 minutes at full power, and will have to cool down for 4 minutes.

This parameter must be taken into account. Ideally, the set you choose should have a duty cycle of 100 % in the power range you will use the most.

8. Cleanliness of the cut

Depending on the plasma station, the cut can be different for similar parameters. The price of the station is often linked to the quality of the cut it offers. A station that makes good cuts cannot be found at 200 €.

Low-cost stations have a bad reputation for producing a lot of disturbances.💥If you plan to use your station manually, this has little impact. However, if you decide to mount your plasma station on a cnc plasma cutter, it may cause problems. Again, the cheaper the set, the more problems it will cause.

Here are the points that I thought were essential to address when choosing a plasma station. If you are planning to build a cnc plasma cutter, I advise you to watch the videos in which I built my cnc cutter. I have created 5 videos to allow you to follow the construction of my machine step by step. The first episode is available here :